There is an old quote saying “A Lie Can Travel Halfway Around the World While the Truth Is Putting On Its Shoes“. This is more relevant than ever. In the age of post-truth, facts are relative and expert is no longer an honorary title. Certain individuals among the human species use Darwin’s doctrine “Survival of the fittest” to make greedy capitalism and macho behaviour morally acceptable. Thus, natural science is in danger of becoming a useful idiot for capitalists, evolutionary psychologists and raving men’s right activists with questionable agendas. Science To The People wish to counteract anti-science forces. Knowledge about the lives of cells not only promotes good health, as an argument for maintaining a healthy lifestyle. We should also be attentive to gems of moral wisdom from a bashful gut cell or an overworked leukocyte.

Thinking back to primary school, there are two instances of learning through alternative teaching methods that made an impact on my 12 year old self: That time in home economics class when we were selected to play either children in a developing country or an industrial country, and most of us experienced the painful injustice of seeing the industrial countries receive cinnamon buns, while we the rest of us had to do with fishmeal. I also received a broken arm.  At the school camp in Hålandsdalen, we recreated the Black Death (Bubonic plague) through a game of deadly handshakes. The innermost part of the fjord served as our scenography. These experiences remained in both heart and intellect, and provoked a different kind of engagement than would a mere intellectual approach to facts. Learning through applied participatory theatre is often used for teaching history and social studies, allowing students to apply emotions in the learning process. Science To The People wants to use applied participatory theatre in science education and public dissemination. Come do theatre with me! 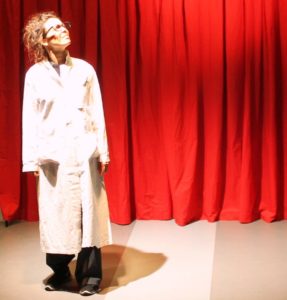